The neutrino is an elementary particle and, as far as we know today, it is a fundamental particle meaning that it cannot be broken down into smaller constituents. The Standard Model of Particle Physics provides a unified description of the three fundamental forces of electromagnetic, weak and strong interactions. Furthermore, all known particles are classified as fermions (quarks and leptons) or bosons (the force carrying gauge bosons and the scalar Higgs boson). A schematic of the fermions and bosons is given in the Figure below. 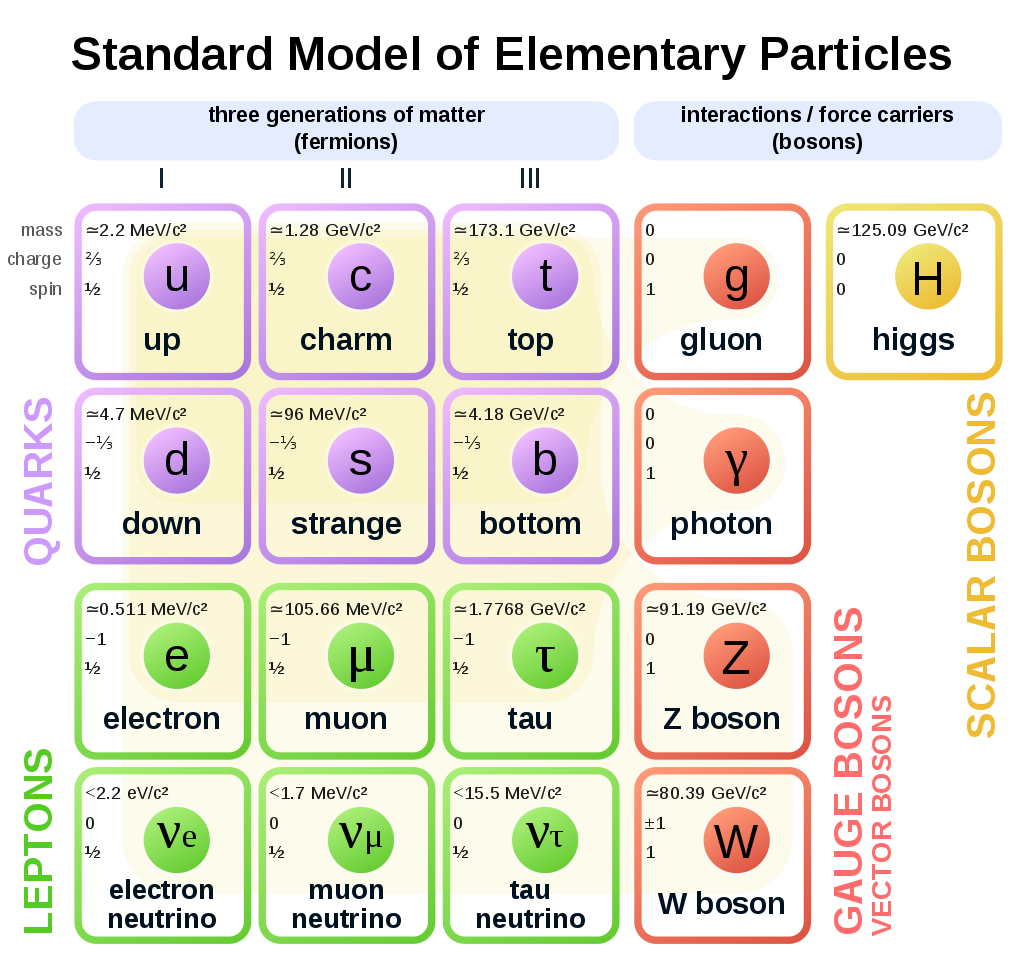 All fermions can be arranged in three generations which have, excluding the masses, identical properties. Furthermore, the fermions are grouped in two classes, quarks and leptons. Quarks participate in all of the four fundamental interactions (strong, electromagnetic, weak and gravitational) whereas charged leptons interact in all except the strong interaction and neutrinos only interact weakly and via gravitation.

Even though the Standard Model precisely explains different branching ratios (e.g. of the Z boson), the ratio of the W and Z boson masses as well as it has predicted various particles before they have been experimentally observed (the W and the Z boson, the gluon and the c and the d quark), it cannot be a complete theory of fundamental interactions because it leaves some phenomena unexplained. Namely, the observed baryonic matter-antimatter asymmetry of the universe as well as a dark matter particle with all of the required characteristics inferred from observational cosmology are not explained. Furthermore, the Standard Model of Particle Physics does not incorporate neutrino oscillations and their non-vanishing masses.

Neutrinos manifest themselves in three different flavors (electron, muon and tau). If a neutrino is produced in a certain flavor eigenstate, it can be later observed as a different flavor. The probability to observe this transition varies periodically as the particle propagates through space-time, and it depends on the neutrino's energy and the mass difference between two neutrino's. This phenomenon is called neutrino oscillation.
A number of experiments have been conducted in the past to characterize the oscillation mechanism, which can be described in terms of three mixing angles and two mass differences. The angles characterize the amplitude of the oscillation probability while the mass differences and energy contribute to the oscillation frequency.

Since neutrionos oscillate, they must have a mass, altough this mass is very small. At the moment this text is written, we do not know which mechanism is responsible for the neutrinos to have a non-zero mass. The study of neutrinos and, particularly, neutrino oscillation is important because it could shed light on some of the phenomena being unexplained by the Standard Model (see paragraph above). The Deep Underground Neutrino Experiment (DUNE) is a next generation long baseline neutrino experiment aiming for precision measurements of some of the oscillation parameters and to explain some of the phenomena not explained by the Standard Model of Particle Phsics. In such experiments, at least two neutrino detectors at different locations are needed, a Near- and a Far-Detector. The ArgonCube design will be applied in the DUNE Near-Detector.