The Deep Underground Neutrino Experiment (DUNE) is an international experiment for neutrino science and proton decay studies. DUNE will consist of two neutrino detector complexes placed in the world’s most intense neutrino beam. The Near-Detector complex will track particle interactions near the source of the beam, at Fermilab in Batavia, Illinois. A second and much larger Far-Detector will be installed more than a kilometer underground at the Sanford Underground Research Laboratory in Lead, South Dakota — 1300 kilometers downstream of the source. These detectors will enable scientists to search for new subatomic phenomena and potentially improve our understanding of neutrinos and their role in the universe. More informations about DUNE is available on www.dunescience.org .

The core component of the DUNE Near-Detector complex will be the ArgonCube Liquid Argon detector. The current design is based on an array of 5x7 ArgonCube modules (5 along and 7 transverse to the beam direction) sharing a common cryostat. An explosion view of an ArgonCube module (left) and the Liquid Argon DUNE Near-Detector with a row of 5 modules extracted (right) is shown in the picture below. Yellow areas in the explostion view correspond to the pixelated anode planes. Dark and light purple areas denote the ArCLight and LCM light detection systems. The module desinged for the DUNE Near-Detector has active dimensions of 1 m × 1 m × 3 m. 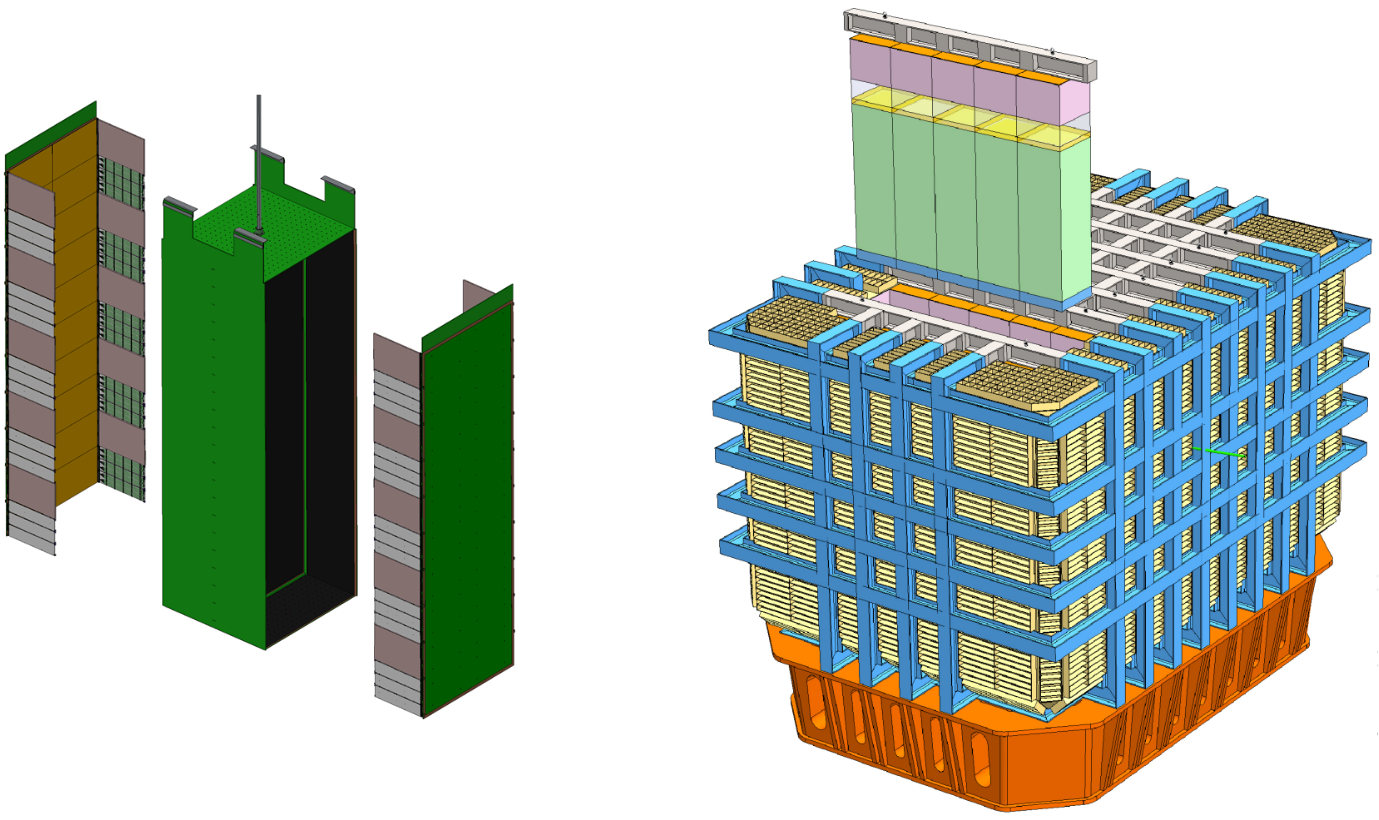 Compared to a monolithic design, a modular detector has several advantages: It allows for scaling the detector up to very large active volumes with a minimal amount of inactive material. Furthermore, single modules can be maintained and upgraded in steps while the rest of the detector can be kept in operation. Each module consists of two independent Time Projection Chambers (TPCs) . Due to the modularity the TPC drift distances are drastically reduced to about 0.5 meters. Therefore, the TPCs can be operated with safe cathode bias voltages of about 50 kV. Furthermore, the scintillation light produced by particle interactions is contained within a TPC, enabling a more precise event reconstruction. Finally, the track smearing due to the electron diffusion is neglectable and there are less stringent requirements on the Liquid Argon purity.

A small-scale prototype for the DUNE Liquid Argon Near-Detector is currently under construction at the University of Bern. The detector contains of four (2x2) modules sharing a common Liquid Argon bath. The pictures below show the cryostat being installed in the laboratory of the University of Bern (left) and a prototype module supported by an aluminium frame (right). The dimensions of the prototype module are about 0.6 m x 0.6 m x 1.2 m. 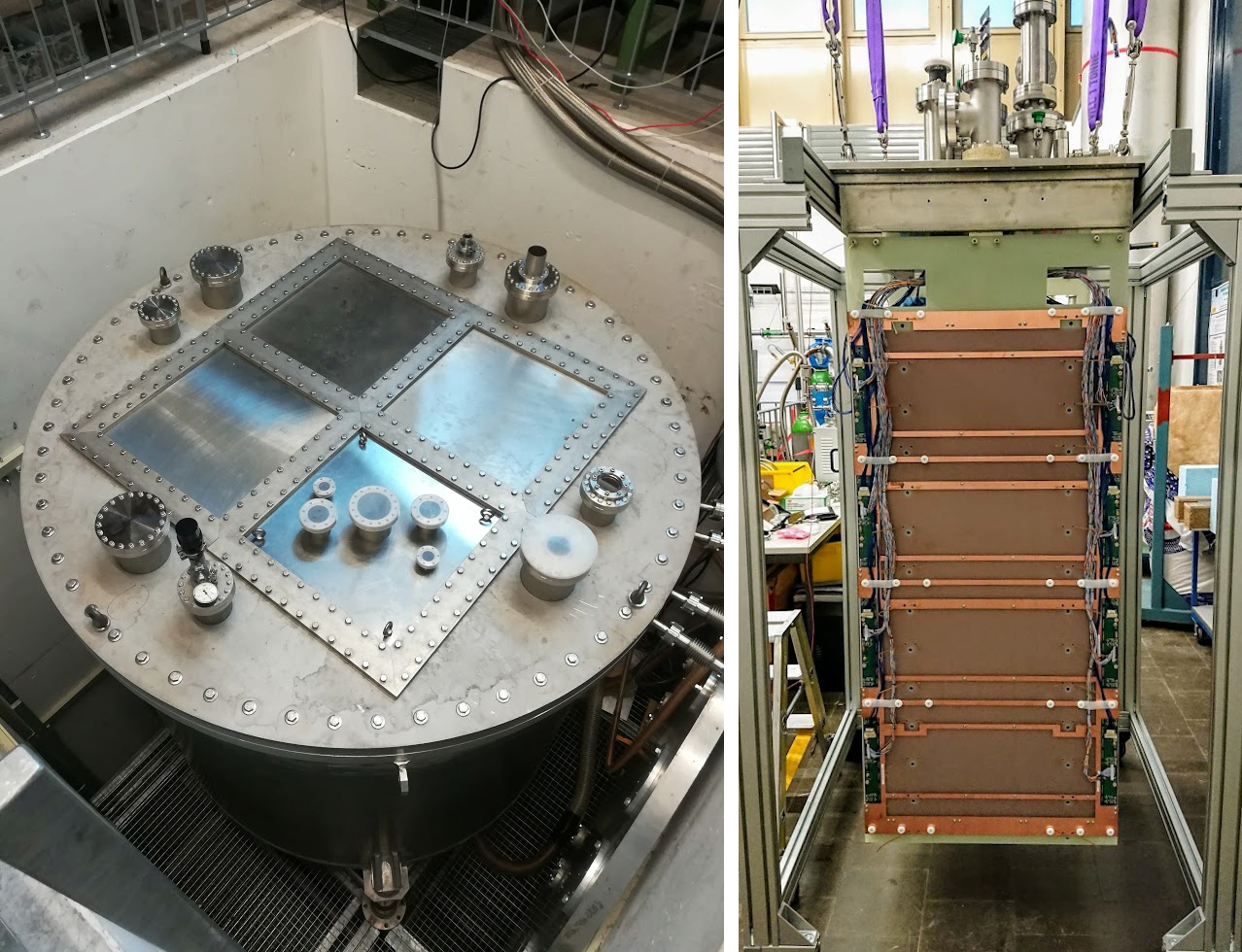 ArgonCube has an ongoing Research and Development program to instrument the modules with new technologies . Three major developments are the pixelated charge readout, a large area photon detector and a new approach for electric field shaping.

The small-scale prototype module shown in the picture above has been tested during an experiment in March 2021 at the University of Bern. Particle interactions induced by cosmics have been observed. The following picture shows three projections of an event display with particle trajectories detected with the prototype module. The grey plane in the picture to the left denotes the cathode plane. Two pixelated anode planes are located at z-positions corresponding to about +/- 320 mm.